CALTECH'S CENTER FOR NEUROMORPHIC SYSTEMS ENGINEERING (CNSE), a National Science Foundation Engineering Research Center, directed by Professor Pietro Perona, held its 7th Annual Industry Day May 16-17, 2001 in Beckman Institute Auditorium. For the first time, the conference was held in conjunction with the LEE CENTER FOR ADVANCED NETWORKING, directed by David Rutledge, the Kiyo and Eiko Tomiyasu Professor of Electrical Engineering. The theme of the conference was "Sensor Networks" with faculty from the two centers presenting their research on smart sensors, wireless networks, optical components, communications, collective robotics, and learning in networks, among other topics.

On each day, a panel of representatives from industry--composed mainly CEOs and Chief Technologists--focused on how sensor networks operate in various industries, such as the automotive, defense, aerospace, infrastructure, and medical-care sectors. Invited presenters and the two keynote speakers, Dr. Charles Elachi, the Director of the Jet Propulsion Laboratory, and Dr. Paul Jacobs, Executive Vice President of Qualcomm, explored the opportunities that can be achieved by having a multitude of sensors networked together as well as the challenges of making sense of the data these networks produce. 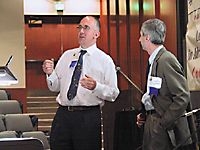 The audience of over 250 people, representing more than 60 companies as well as Caltech faculty and students, heard the reflections of executives from such companies as Air Fiber, Graviton Systems, IBM, idealab!, Invensys Controls, Qualcomm, Sensoria, TRW Space and Electronics, VivoMetrics, and Wingcast. Speakers from DARPA and the NSF indicated that various government programs are also geared toward tying together various sensors creating what will eventually become a sensor web analogous to the computer networks that form the Internet.

In response to this description of the future, a constant refrain from the audience questioned how such a sensor web will deal with problems of privacy and security. Although the panelists did not have specific answers, it was evident that industry and government are aware of the issue and that a mixture of technical and legislative means will be needed to address them. Another challenge that surfaced was how to prevent total, catastrophic failure when sensors are networked and tie everything together from home appliances to telephones, computers, and traffic signals. The danger of a software glitch bringing life back to a "stone age" was mentioned and the answer seems to be a mixture of redundant sensors, developing logical programming environments, and new mathematical tools for assessing complex networks. 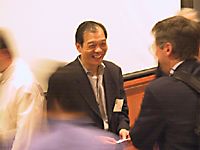 Industry members in the audience were also interested in how to make better use of the sensor networks that exist today. In the presence of large streams of data, the question is how to extract the maximum information from this data with potential applications that range from condition-based maintenance to attention-based diagnostics. The audience also benefited from discussions with students from both Centers, as approximately 40 students presented posters.

Visit the CNSE and Lee Center websites for more detail, including downloadable forms of various presentations.