An Environmental Force to Be Reckoned With

THE CURRENT FOCUS OF PROFESSOR JARED LEADBETTER'S RESEARCH is the mutually beneficial symbiosis formed between termites and their diverse gut microbes. Termites are important globally, being dominant fixtures of many tropical and sub-tropical ecosystems. Far from being merely the pests we rightfully associate with domicile destruction, they play important roles in the turnover of plant material into carbon dioxide and in the process of N2-fixation. As it turns out, termite-gut microbes play critical, irreplaceable roles in both of these important activities. Many of these microbes are found unique to the termite gut, a tiny environment unto itself about 1 to 10 microliters in volume. As many as 2,000 species of termites occur worldwide, each with their own unique microbiota: these insects play host to a remarkable biodiversity. 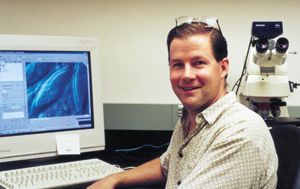 Leadbetter has sought to better understand the details of the microbial involvement in these gut functions. Specifically, he has focused his research on the cellular nature of a very unusual competition for hydrogen gas that occurs in the gut. This fight occurs between two distinct groups of microbes: methane-generating Archaea, and acetate-producing Bacteria. H2 is an important free intermediate generated during the fermentation of wood polysaccharides in many environments, but its fate in the termite is remarkable. Termite gut microbes typically convert the bulk of cellulose-derived H2 into acetate (neutralized vinegar), which is thereafter used by the termite as a key carbon nutrient. This contrasts with other environs that might otherwise seem similar at first blush, including the rumen of the cow. There, the majority of the hydrogen gas is converted into methane, a potent greenhouse gas with zero nutritional value to the animal. The gut tracts of animals in general are a major contributor to global methane, but termite emissions are responsible for only a few percent of the total budget. However, if their unusual acetate-generating bacteria were absent, these insects' methane emissions could increase ten-fold, perhaps becoming the most significant biological source of this potent greenhouse gas. Thus, termites and their microbes are important to global atmospheric chemistry as much for what they have evolved not to emit, as for what they actually do. 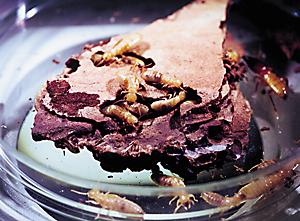 One surprising finding of Leadbetter's research is that several of the microbes catalyzing the conversion of hydrogen gas into acetate are so-called spirochetes. These helical- or wavy-shaped bacteria are notorious for their undesirable roles in the causation of disease in animals. Diverse spirochetes are the agents of diseases such as syphilis and Lyme's arthritis. However, Leadbetter's research has revealed that in the termite, they play useful roles. This notion was recently extended by the finding that several gut spirochetes are involved with the fixation of N2 gas into biologically useful forms—an important contribution to the protein-poor, wood diet of their hosts. The view of spirochetes as being beneficial to both their own immediate environment, and to ours, is novel. Leadbetter's research seeks to continue to illuminate the unique features of these microbes, the underlying bases for their interactions within the guts of termites, and their impact on the external environment.