The Tale of Two Lasers 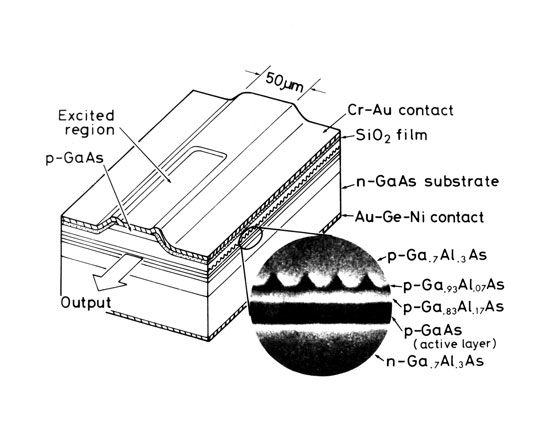 Forty years ago, Amnon Yariv, now Caltech’s Martin and Eileen Summerfield Professor of Applied Physics and Professor of Electrical Engineering, and his research group at the Institute invented the semiconductor distributed feedback laser (DFB laser). The laser still serves as the sole light source powering the Internet fiber system. Along with the optical fiber, it is one of the two main pillars of the optical communications revolution.


Laser light is capable of carrying vast amounts of information, but to utilize this potential, it needs to be as spectrally pure—as close to a single-frequency sinusoid—as possible. The DFB laser’s unprecedented spectral purity enabled a larger information bandwidth and longer transmission distances via optical fiber. Its purity was achieved by incorporating a nanoscale corrugation within the multilayered structure of the laser, which effectively filtered out extraneous waves that contaminated the ideal wave frequency.

Over the last decade it has become increasingly clear that the demand for high-speed communication, as exemplified by the “Netflix phenomenon,” is outstripping the capabilities of the stalwart DFB laser. What was good enough from 1975 to 2014 is no longer sufficient. In the DFB laser, once electrical current is converted into light in the active region of the semiconductor, the light is stored in the same neighborhood where it was born. Since semiconductor materials are strong light absorbers, it follows from basic physics that the coherence of the laser field must be degraded due to these losses.

Rather than tweaking the properties of the DFB laser to meet the bandwidth demand, something that the industry has been doing for nearly 40 years, the Yariv group decided to take a look at the origins of the phase fluctuations noise. Both the fabrication and processing techniques and the theoretical understanding of the laser physics have advanced during the intervening years, so a fresh look at the problem of high-coherence lasers was warranted.

But first, a brief primer on laser physics: Every laser, with no exception, has two main components. The first is an atomic medium with an “inverted” population of excited electrons (atoms, or molecules), the so-called active region. In this region, the optical wave is amplified in transit by inducing the excited electrons to make transitions to lower energetic states. In the ideal, nonexistent, laser, the excess energy released in the process is added in phase to the optical wave, thus amplifying it.

In the semiconductor laser, excited electrons are injected at a high energy, which they acquire in passing through a battery or power supply into the active region. Some of these electrons, however, rather than be induced by the optical wave to give up their energy in phase to the field, do so spontaneously. The power emitted by these spontaneous transitions constitutes noise, since they occur at a rate and phase independent of those of the optical field in the active region. The result is a degradation of the coherence. It should be noted that one of the most important consequences of applying quantum mechanics to electromagnetic fields is the relationship between the induced and the spontaneous rate. As a matter of fact, the phenomenon of spontaneous transitions cannot be explained classically and is thus of pure quantum origin, so the limiting noise in the semiconductor noise is quantum noise.

The second important conceptual and structural component of a laser is the electromagnetic surroundings of the active medium, i.e., the optical resonator, which determines the form of the optical mode. Its role is to concentrate and store the optical energy emitted by the electrons and, in the process, provide optical feedback, a prerequisite for laser oscillation.

Now, returning to the story of the new Yariv group laser: To minimize the amount of spontaneous-emission optical noise power, Yariv’s team needed to reduce the number of excited electrons in the resonator. Another consequence of quantum mechanics is that by the proper placement of the active region and the design of the resonator mode, one can reduce, by orders of magnitude, the rate of spontaneous transitions per electron into the lasing mode. To their great surprise, the Yariv group determined that the reigning canonical semiconductor design methodology, which evolved over the last 40 years or so, did not address this noise issue. The main concern over these years has been to maximize the optical gain.

In their new laser design (Figure 2), the Yariv group moved the active region where light is generated “far away” from the region where the light is stored, in this manner reducing both the optical losses as well as the rate of spontaneous emission into the lasing mode.

The homemade first generation of the new Yariv group lasers demonstrated a phase noise nearly two orders of magnitude smaller than that of the commercial lasers used in optical communications systems today. The group believes they can go even further. Future design of semiconductor lasers will need to apply the main lesson learned by the Yariv group. These lessons can be summarized as the need to physically separate the active region where photons are generated from a low-loss (absorption) region where they are stored.

It took the Yariv group seven years to develop the tools, both theoretical and nano-fabricational, needed to realize the first generation of the new lasers. The process involved two generations of graduate students and postdocs as well as crucial support from DARPA, the Army Research Office, and the National Science Foundation. Major contributors to the recent effort that resulted in the high-coherence lasers were graduate students Christos Santis and Scott Steiger. The group is continuing research in the general area of high-coherence light sources. The effort involves pushing to shorter wavelengths—the first generation oscillated near 1.5 microns—and new resonator concepts designed to achieve even more extreme separation of the laser absorbing and amplifying regions. They are also looking at new materials and are exploring the potential applications of such lasers to 3-D imaging.