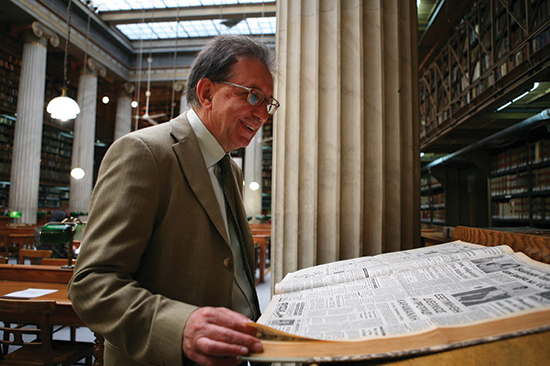 Professor A. S. Fokas holds the Chair in Nonlinear Mathematical Science at the University of Cambridge in the UK. He has a BSc in aeronautics from Imperial College, London, a PhD in applied mathematics from Caltech, and an MD from the University of Miami.

ENGenious: What inspired you to become an applied scientist?

ENGenious: Why did you also decide to get a medical degree?

Fokas: I had some correspondence with the late Israel Gelfand, one of the greatest mathematicians of the last century, and I noticed that he was located in the department of biology. Thus I presumed that he was doing mathematical biology (which actually was not the case), and, hence, I decided to take a couple of years off to study biology and medicine. This finally led me to the PhD–MD program of the University of Miami. I enjoyed medicine much more than I expected, and it became a difficult decision whether to follow a residency at Stanford University, where I was doing my internship, or to return to mathematics. In any case, I consider this investment in medicine the most important and most useful investment I have ever made in my professional life. Studying medicine has given me a completely different perspective in life and also has led me to a lifelong fascination with the function of the brain. It should be noted that perhaps the only positive thing about getting older is that our understanding deepens, and this I believe happens by continuously establishing new connections, which is actually a reflection of how the brain is organized. Perhaps this suggests the importance of trying to become a polymath, because the more diverse areas you are aware of, the more connections you can establish, the deeper understanding of various phenomena you can achieve.

Fokas: I have been privileged to have had faculty appointments at some great institutions. But in terms of quality density, there is no doubt that Caltech is the best. Unfortunately, you appreciate this fact only after you leave. All of a sudden, you realize that you were in paradise. Taking into consideration the size of Caltech, what it achieves is absolutely phenomenal! Perhaps, as Chair Ares Rosakis has noted in a recent interview, the small size is an advantage: it promotes interdisciplinary approaches, it ensures extremely high-quality faculty, and it allows for a much closer relationship between students and the faculty.

ENGenious: How would you describe your professional life and contributions?

Fokas: Although I am considered an applied scientist, my mentality is closer to that of a pure mathematician, in the sense that the main criterion for choosing a research project is not usefulness but aesthetics. Of course, there is a deep relation between aesthetics and the truth—recall the Latin motto pulchritudo sigillum veri (“beauty is the seal of truth”)—but also a relation between aesthetics and function. Perhaps this is the reason why some of my contributions appear to have also a commercial value. In particular, our quest with Gelfand to explore the beautiful formalism of the so-called Riemann-Hilbert and D-bar methodology led to the completely unexpected derivation of an analytical formula for the inversion of the attenuated Radon transform. This transform plays the same fundamental role in the important medical imaging technique of single photon emission computerized tomography (SPECT) that the classical Radon transform plays in computerized tomography (CT). This has led to improved image reconstructions not only in SPECT but also in positron emission tomography. Similarly, aesthetics was crucial in my work on electro-magneto-encephalography, whose related patent was financed by Cambridge Enterprise. It should be noted that nothing in my life has happened easily. The above results in medical imaging where the culmination of research efforts of almost 20 years. Also, my most well-known achievement, the development of the so-called Fokas method, was first introduced in 1997, but I started working on this project in 1982! By the way, it was very flattering that just before delivering the Lagerstrom Lecture at Caltech in May 2014, an editorial in SIAM Review compared the importance of this method for solving boundary value problems for linear partial differential equations with the impact of the “Fosbury flop” in the high jump.

ENGenious: What advice do you have for the next generation of Caltech applied scientists?

Fokas: The most important thing is to enjoy life while you’re at Caltech, because most likely this will turn out to be the best period of your life. Every moment of life must be enjoyed, because every moment is irreversible. Do not waste time in anything that does not involve quality. Remember, success comes only after hard work in an environment that inspires excellence, and Caltech is the epitome of such an environment.

ENGenious: Reflecting on your career so far, has there been a mistake that was critical to your success?

Fokas: I’ll tell you a story. At some point, Israel Gelfand convinced me to work with him on one of the most important open problems in biology, the problem of protein folding. As you know, a protein consists of a sequence of amino acids, so, in principle, if you are given the sequence, you should know everything about this protein, including its topology. But no one can predict the topology from the sequence. At first, I was very reluctant to participate in this project because I knew that many great people had worked on this problem. However, Israel was very persistent; thus, I did work for a couple of years with Israel and collaborators on this endeavor. Since this is not an area of my expertise, I could not evaluate the importance of our results. In any case, I recently told my wife that this project was probably a waste of time. Fast-forward to today, when during a prestigious lecture delivered in May, a distinguished scholar who is very well known in this area reported that his group has reached the stage where they can predict the topology with something like 78% accuracy, and this would not have been possible without the breakthrough work of Fokas and Gelfand. So until very recently, I had thought investing in this project was a mistake, but apparently it wasn’t. Overall, perhaps the message is that quality work sooner or later gets recognized.

ENGenious: What does the future hold for you and your work?

Fokas: I have done two crazy things in my life. One was to study medicine, because I went from being an associate professor to being a student in an area that I knew absolutely nothing about. The other was six years ago, when I made the decision to start working on the most famous open problem in the history of mathematics, namely the Riemann hypothesis, which is considered a problem in pure, as opposed to applied, mathematics. However, perhaps this decision was not completely crazy, since the Riemann hypothesis is related to the Lindelöf hypothesis, which is a statement about asymptotics, and asymptotics is certainly part of applied sciences. Actually, most of my life I have been involved with asymptotics. In any case, we have developed new remarkable mathematical structures and have established deep connections among different fundamental mathematical entities. Let us not forget that establishing new connections is what science in particular and life in general is all about! Thus, we are hopeful.

Athanassios S. Fokas is Chair in Nonlinear Mathematical Science at the University of Cambridge.