Three Engineering and Applied Science professors have joined forces to work with Northrop Grumman Corporation on the largest sponsored research project from industry that Caltech has undertaken in recent history. The project is called the Space Solar Power Initiative (SSPI), and the co-investigators are applied physicist and materials scientist Harry Atwater, electrical engineer Ali Hajimiri, and aeronautics and civil engineer Sergio Pellegrino. 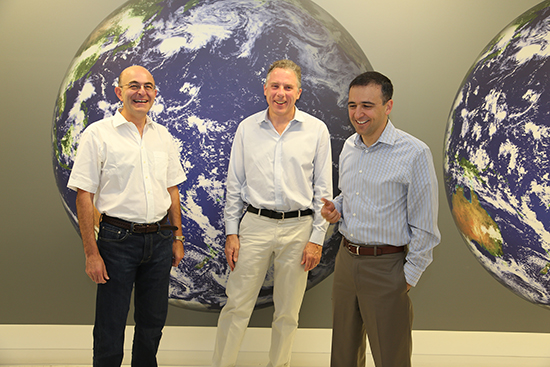 Soon after the official announcement by Caltech and Northrop Grumman, the professors sat with ENGenious to discuss the idea, their plan for moving forward, and the implications of their success.

SSPI is a strikingly ambitious and challenging plan to send millions of clean kilowatts to an energy-hungry planet imperiled by climate change.

The goal: the creation and launch into orbit of thousands of identical space vehicles to form a constellation that maintains a precise shape. In the airless weightlessness of space, each vehicle will transform itself into an element of a modular power-generating space station with the square mileage of a city park, each module unfolding into a structure with the thinness of paper, made up of a network of billions of greeting-card–size tiles.

Control systems on board the station will maneuver these giant tile sheets to keep one side continually facing an unsetting sun. The sunlit-side surface will be a layer of material nanostructured to capture the energy of the illuminating sunlight. As this captured energy passes through the tiles, another structured layer will continuously convert it into radio-frequency power, which in turn will be beamed to Earth using focusing mechanisms similar to those now used in phased-array radars, which will send the radio-wave power earthward, in real time, to receiver ground stations located at specific destinations on our planet.

The ground stations will be receivers that can absorb the radio-frequency power and convert it into electrical energy. Some of these receptors will feed into existing electric utility grids. Others may be isolated micropower networks at remote off-grid locations or even individual farms or factories, all receiving a continuous infusion of power from the sky, 24 hours a day.

A tiny fraction of the solar energy captured will be converted on board to electrical energy to power the data-processing and communication modules that maintain and repair the station’s structure and respond to signals from Earth.

Each of the three leaders of the Caltech team is tackling a different part of this formidable system. First, one surface of each tile in the immense array must be able to capture solar energy efficiently. The research group led by Professor Atwater will design and prototype ultralight photovoltaic tiles, taking advantage of the reduced structural demands of zero-gravity conditions.

The solar energy captured by these tiles must then be converted into radio-frequency (RF) power that can be efficiently transmitted through clouds and atmosphere to Earth, even on cloudy days. Professor Hajimiri’s research team will create the integrated system that will convert the direct current (DC) solar power to RF power and send the RF power from the phased array, which can then route RF beams to a single or to multiple receiving ground stations.

Finally, Professor Pellegrino’s research group will design and prototype the key components needed for the architecture of a hundred meter-scale, self-folding, origami-like, flexible, ultralight structures that can adaptively change shape and orientation in real time.

The starting point and basic conceptual element for the project is the “tile,” a 10 x 10-centimeter solar-power converter and RF transmitting antenna that has already been created in mockup form by the SSPI team.

A functional prototype tile is several years away. But because the system design is modular, once a prototype tile is realized, the scale up to systems consisting of thousands or millions of tiles does not add significantly to the system complexity. The modular design and realization of scalable systems are aspects of the project that deeply engage all three leads, who believe this approach can be a model for future space engineering enterprises. The three are attacking the technical issues of tile and system design in a sequenced manner tied to success milestones—in which a series of significant but achievable steps add up to the capability of realizing a transformative outcome—that has proved to be a successful approach for large-scale engineering projects. Hajimiri likens the process, and its eventual results, to “the power of an army of mice over a big elephant. The ability of a large number of smaller identical units working in tandem, working in synchronization, to create more than the sum of the parts.”

The project grew out of a working group on future space technologies for renewable energy, established by former Caltech President Jean-Lou Chameau. Ares J. Rosakis, then Chair of the Division of Engineering and Applied Science, saw the potential opportunity. “Ares said, ‘You might want to begin a dialogue on this subject and see what can be done,’” Atwater recalls. From this initial dialogue, insights and ideas arose that finally culminated in the establishment of the $17.5 million project.

“The Space Solar Power Initiative brings together electrical engineers, applied physicists, and aerospace engineers in the type of profound interdisciplinary collaboration that is seamlessly enhanced at a small place like Caltech,” said Rosakis in his announcement of the project in April.

Hajimiri notes that the idea of beaming solar power to Earth from space goes back at least as far as a 1941 short story by Isaac Asimov called “Reason,” in which a manned space vehicle with this mission is the scene of an exploration of the author’s famous Three Laws of Robotics. (The unmanned SSPI station, however, will be far different from Asimov’s, which carried a human crew.) 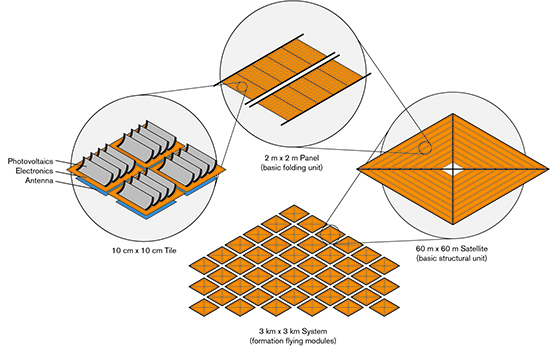 Space is a logical place for solar power, the team maintains. Solar power, Atwater says, has long been seen as a hopeful source of cheap and clean energy, but on Earth it has clear limits. “Solar arrays, no matter how efficient, only generate power when the sun is illuminating them,” explains Atwater. “So if solar power is going to be the principal so-called ‘dispatchable’ baseload source of power that replaces today’s fossil-fuel–powered electric-generating stations, inherently you have to have the generating source be available all the time. This is not possible for ground-based solar energy without some complementary form of electrical energy storage, which adds significantly to the cost of solar electricity generated on Earth.”

But, he adds, space provides a solution: “The great thing about space is that [orbits exist where] there’s no nighttime. And so we have the prospect of making dispatchable power, power that flows continuously and that can be instantly sent to where it is needed.”

The potential benefits are enormous, Atwater says. “About a quarter of humanity has no electric power whatsoever. And so this is an enabling technology that could leapfrog the electric-power transmission grid on Earth, and have the same effect that the cellular phone system had on communications,” giving access to phone use in places without existing copper wire–based landline phone infrastructure.

And the benefits extend beyond Earth. Large-scale power for development in space is another looming need, notes Atwater: “One of the limits on the ability to further develop technologies in space is providing sufficient power to get around in space. And solar-driven electric propulsion using ion thrusters could dramatically lower the cost of going, say, from low Earth orbit to geostationary orbit. That opens up a whole new pathway for large-scale development in space that wouldn’t otherwise be possible.”

The architecture of the overall structure is another challenge, notes Hajimiri, and an exciting one. “For the space power station to operate as a single unit, and send the power to a localized area, you need to form a highly synchronized array,” he says. “And the modular tile architecture actually makes this easier because of the same electronic integration that makes the tile and tile assemblages lightweight. Instead of having a large number of different components, you have one very small component that captures a lot of functionalities. And that also couples electromagnetically to the parts of the structure which are the electromagnetic radiating structures, the antennas.”

He continues: “The beauty of it is that it’s a combination of a top-down and bottom-up approach. Top-down, you are looking at the application and deciding how you want to implement it. Bottom-up, you have these technologies and capabilities. So how will you apply them? The hammer looks for a nail. We have found a way we can use the collective thinking power of all the groups to come up with this idea and this instrumentation.”

This top-down bottom-up reinforcement and self-correction mechanism also pervades work going on in Atwater’s lab. “One of the things that’s happening in my world of optical nanophotonics is the wholesale importation of scientific concepts from the [well-established radar/radio] and millimeter-wave array and antenna design field into the optical and infrared-optical materials and meta-materials design,” he says, pushing insight and technologies from one set of wavelengths to another. “Therefore some of the lessons that we’ve learned about making nanophotonic structures out of ultralight materials and then using radio-frequency engineering concepts at optical frequencies are going to be a very exciting area in the future.”

The future possibilities of this collaborative research effort also inspire Pellegrino. “I’ve actually never tried to do anything on this scale,” he says. “I’ve collaborated with people who directed me into a little piece of a technology. But this time we started with a really big objective but little detail, and so a plan evolved in very broad outline form.”

For Pellegrino, this provided an opportunity. “On the structure side, there is a consistent line that I’ve been following since the day I finished my PhD. I had seen many structures that, although they looked beautiful, were very complicated to build. Therefore over the years, I’ve been trying to conceive structures that are conceptually much more sophisticated and actually look extremely simple. And are even simpler to build.” This continues to be his work path. “For me, as a structural engineer, the theme is still that of creating extremely simple structures.”

In the case of SSPI, says Pellegrino, simplicity helped solve a key problem. “Weight considerations took a more emphatic turn in the planning,” he explains. Initially, “we identified costs as predominantly the launch cost and did not start arguing over potential new technology that might lower the launch costs. We said, ‘Maybe the launch costs will come down. But let’s assume that none of that is going to happen. Let’s just try to make the structure superlight.’”

Fortuitously, the discussions about the SSPI project, notes Atwater, came “at a time when my group was beginning to have success removing flexible, high-efficiency solar cells from their rigid, heavy supporting substrates, which seemed to be a natural enabling technology for space solar power.”

All three faculty members and their research teams are enthusiastically working toward building a prototype—at first to test on Earth, and eventually in space. “It’s a wonderful project,” Pellegrino exclaims, “in terms of all the things we get and need to do!” Hajimiri says, “It is just the right level of difficulty for the state of the art. It is difficult, but it’s not impossible. And that especially pushes the boundary and the limits of engineering and science.” Atwater adds a venerable bit of engineering wisdom: “The difficult we have in hand; the impossible takes a little longer.”

Furthermore, the association with Northrop Grumman is natural, and a key ingredient, Atwater says. “We’re interested in making real things, things that can be manufactured at scale. To do that we need partnerships with people who could actually do the manufacturing.” Hajimiri adds, “Their experience keeps us grounded—figuratively, not literally.”