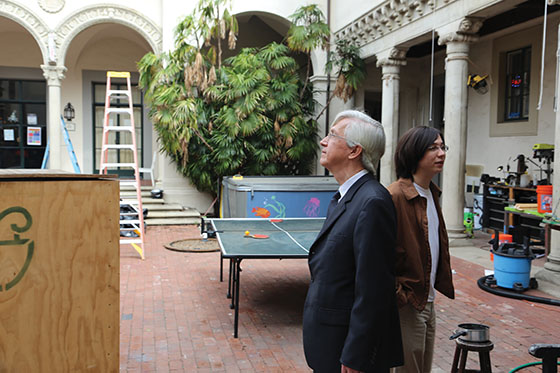 Dan O’Dowd discovered his passion for fixing bugs in code as a Caltech undergraduate student. Less than 10 years later, he founded Green Hills Software, and he is still serving as its president and chief executive officer. Before founding Green Hills Software, he was manager of compiler and operating system development at National Semiconductor, where he designed the architecture for the NS32000 32-bit microprocessor. Prior to that, he was at APh Technological Consulting, developing some of the first embedded development tools for microprocessors. These were used for developing the first handheld electronic games for Mattel and Mattel’s line of home video games. O’Dowd has crossed paths with many luminaries in computer science, including Steve Jobs, and his mathematically proven secure software, called INTEGRITY, has been essential to the aerospace industry. His son Richard works at Green Hills Software as a senior software engineer, developing the next generation of real-time operating systems.

ENGenious: How did you both come to choose computer science and Caltech?

Dan: Caltech is the top school for science—it was then and it is now. I actually started out in mathematics, but I took some computer courses along the way, which I liked. Knowing that programming would mean guaranteed employment, I switched to computer science, which is still sort of math, just a more practical application. Of course, there was no computer science department at the time. That didn’t start until the year after I left, so I got an engineering degree, but with a focus in computer science.

Richard: I was steeped in my dad’s interests. I was always a math and science guy, so Caltech was a natural fit. My dad did computer science, so I dabbled in it and in programming. But when I came to Caltech I gave myself two choices, biology or computer science, since they seemed like the two emerging fields going forward. I did try biology, but computer science proved much more interesting to me.

ENGenious: Was it a coincidence that you both ended up at Dabney House?

Richard: My dad didn’t talk much about his time at Caltech. He did share some, but more of it was after I came to campus and we realized I was his legacy in Dabney. I wasn’t even certain which house he was in when I got here. I had an inkling it was Dabney, but I didn’t know for sure. As it turns out, we are both keepers of the Dabney jai alai tradition and were both avid players of the “ball against the wall.”

Dan: I came to Caltech to visit Richard at Dabney shortly after Richard got here, and I had this weird déjà vu where I felt it was 37 years earlier. It was at the same time familiar and unfamiliar, and I had the feeling of being a freshman coming in for the first time. I felt he had to come to that himself; that he ended up in Dabney was by way of his own path that happened to intersect with mine.

ENGenious: What Caltech experiences do you still carry with you?

Dan: I found a memory recently. I stumbled on a manila envelope in an old box marked “September 1976.” Inside were my student records of fixing bugs for one month. I recorded everything I did, every bug I had, the mistakes I made, and how long it took to fix them. I was studying my own process even then. Fixing bugs has been my professional career, but the original notion started at Caltech.

Richard: Caltech students are a lively bunch, up to all sorts of random shenanigans. Everyone is smart and coming to new ideas and new conclusions. Your mind is changed and you change minds in routine conversation about interesting topics. And then there is jai alai, of course.

ENGenious: Why is your collaboration with the aerospace industry unique?

Dan: What we do, for the most part, at Green Hills Software is solve the basic problems of software. Following traditional methodologies, software invariably has bugs and security vulnerabilities, which are simply not acceptable when you’re building something that people’s lives are dependent upon. And yet software is still being created the traditional way, so how do you fix it? The aerospace industry is a place where they take this question seriously. It’s the one industry where they really go to the trouble to do it well, because planes do crash, and hundreds of people die when they crash. There is major incentive to study and fix problems. I was interested in the problem of fixing software, the aerospace industry needed that problem solved, and we were equally dedicated to the solutions. That combination created opportunity, and now most modern aircraft use our INTEGRITY software and our tools for debugging the software.

ENGenious: You also have worked on space technology with JPL . . . ?

Dan: Yes, in late 1970s I designed the microprocessor that was used in the camera onboard the Mars Global Surveyor. The Jet Propulsion Laboratory calls it a camera, but it’s really a telescope that photographs the surface of Mars, which is why we now have a complete high-resolution map of the planet. It was also used by the Mars rover for communication to Earth.

Richard: I would say dabble some in computer science. Actually, almost everybody at Caltech now does, because CS 1 is taken by every incoming student. Caltech gives you a good foundation in programming, which is in high demand and rapidly turning into a core skill of science and engineering. Many of my Caltech friends are now coding in addition to being engineers. We are the coding experts among our working peers, and it makes us very valuable.

ENGenious: Why do you equate some software with weapons of mass destruction?

Dan: Soon every car will be internet connected. Researchers have recently demonstrated that by hacking the internet connection, they can control the brakes, throttle, and steering of several popular models of cars. Every security bug in the millions of lines of code that run a car is also in millions of other identical cars. A hacker can exploit one of those bugs to seize control of millions of cars at the same time, accelerating them all to 100 miles per hour and turning them into oncoming traffic, causing millions of high-speed head-on collisions in a matter of minutes.

One bug can be more devastating than a nuclear weapon. Internetconnected cars are weapons of mass destruction. In dangerous disciplines like nuclear weapons, infectious diseases, and deadly chemicals, there exist strict safeguards and regulations. There are no similar restrictions for software, which can now be as deadly. Engineers must own up to this and acknowledge that we’re building things which are extraordinarily dangerous and need to be fixed before they go to market. We cannot design the means of our own destruction. We have a lot of control as the designers, because they can’t build something until we design it. We must be able to say, “No. This device can kill people. We will not connect it to the internet,” even when that could mean the loss of a job. If something can’t be built safely, it shouldn’t be built at all.

ENGenious: How are you encouraging engineers of your generation to put this notion of safety into practice?

Richard: You can lead by example. I feel like some engineers have a problem with constrained thinking. They often receive constraints, mainly from management, of time and money. So the engineer says, “Okay, I’ll do the best that I can do.” And then management will say, “Well, now you have even less time and less money.” And the engineer will say, “I’ll do the best I can. I mean, it’s not going to be good, but it’ll be the best that I can do.” What they don’t say is, “No. We can’t do the right job with that much money and that much time.” The engineers need to push back in these cases, because this culture can be dangerous. It can kill lots of people. We have to think it all the way through and push back.

ENGenious: How did Caltech help you integrate this base layer of safety?

Dan: I work on technology, but I also have to get people to understand the fundamental ethical problem so that the decision makers will make the right decisions. When I was a student at Caltech, there was a course on engineering ethics, which taught us that we could design a product that wasn’t very good, or of low quality, but that we must say no at the point when we realize a device is an outright danger to humanity. To refuse to make a bad product is an acceptable moral choice but a potentially insufficient one. At some point you have to call it out, become the whistleblower, and foster support from other people if you believe there is a tragedy or catastrophe in process.

ENGenious: Are design integrity and logic having their meta-battle moment?

Dan: We need to ask why it is that we think we need the things we’re building. What is their value? If the answer is convenience, cost savings, or entertainment, then follow that question with another: Is it worth it if that thing can kill millions of people? A prime example is the internet connected home. Once you come to this concept and you identify cost savings or convenience opportunities, then you suddenly think everything in the home should be connected as the next logical conclusion: “The stove is in the house, so it must be connected.” You can’t just push a high-level concept down to the lower levels without thought. At the point where you get to the stove, it becomes too dangerous. If someone can hack into your stove and cause an explosion in your home, that is unacceptable risk. We need to get the engineering back on track one device at a time and figure this out. We cannot start with a big idea and build a reality without thinking it through device by device. And if a device cannot be fixed, then it shouldn’t be connected to the internet, despite market forces, competitors, or bottom lines.

ENGenious: How do you make code reliable and safe?

Dan: We need to start by separating the critical code from the non-critical code, which greatly reduces the debugging task. Often code serves to optimize, improve, or entertain, all of which takes a lot of code but doesn’t control the actual device. It’s okay if the non-critical part of software doesn’t work. It might be annoying, but it is not critical. We can’t make all code reliable—it’s just too much. We find a way to get it down to the few percent that is critical and make sure we do that part correctly. This can cost $1,000 per line of code. And before anyone even thinks about cost, consider this: If your device is such that it has the ability to kill lots of people, it almost by definition is a big enough business to support this level of software scrutiny and safety. Cars are a trillion-dollar business. Trains are a hundred-billion-dollar business. Our exploding stove? Tens of billions of dollars are spent on stoves annually. Guaranteeing the safety of critical software in these products is a small reinvestment of profit that provides huge payoffs in the overall health of the consumer and the company.

From Debugging to Integrity in Coding
PDF / HTML