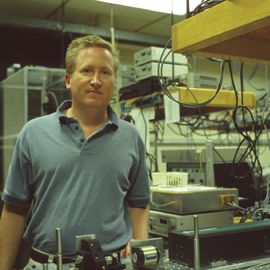 Consider a tiny glass sphere or spherical droplet. What would happen if light could be launched at near-grazing incidence along its interior wall? This would yield the optical equivalent of the familiar acoustical whispering gallery.

In optical whispering galleries, solution of Maxwell's equations shows that light can be guided along trajectories that are tightly confined near the surface of the sphere. Because of spherical symmetry, these whispering-gallery solutions (also known as modes) correspond with solutions to the classic hydrogen system of atomic physics. If the sphere is large—compared to the scale of the wavelength of light—we can expect to be able to interpret the whispering-gallery motion as an orbit in the sense of an approximate ray-optics picture.

Light trapped within a glass sphere as a ring orbit is shown on the opposite page. Although the sphere shown here has a diameter less than the thickness of this page, it is nonetheless large on the scale of the wavelength of light, and the mode in this case clearly meets our notion of an orbit. One comment is in order: the "light" that has been trapped in this sphere is actually in the infrared, but has been made visible by the addition of a tracer element within the sphere that enables up-conversion to the visible green band.

Optical whispering galleries can be made in several geometries. In addition to spheres or droplets, it is possible to fabricate disks, rings, and racetrack geometries using combinations of lithography and etching processes similar to those used in the semiconductor industry.

However, what makes droplets (or spheres formed first as droplets) special is the near atomic perfection of their surface finish. Unlike lithographed or etched whispering galleries, which are considerably rougher, a sphere's shape is determined in the molten state by surface tension. It therefore exhibits a degree of surface perfection very difficult to match by other means. Surface blemishes and roughness tend to randomly scatter light from whispering-gallery orbits and thereby degrade light storage time.

The lifetime of the mode as given by its quality factor, or Q value, is an easy way to measure the superior performance of spherical micro-cavities in comparison to semiconductor-processed micro-cavities. Q values for silica micro-spheres formed as molten droplets can exceed 1 billion, while the record for a lithographically processed structure is nearly 5 orders of magnitude lower. This difference has made droplets and spheres an object of interest for some time in a number of different fields.

In a ray-optics picture, a Q value this high means that light inside a sphere about 30 microns in diameter will trace out orbits up to a million times before leaving the cavity. Returning to the acoustic analogy, a true whispering gallery with an equivalent Q value of 100 million could resonate or "ring" for over an hour.

Introducing or "coupling" light into the high-Q modes of a spherical whispering gallery is non-trivial. Efficient coupling requires first that the orbiting wave's phase velocity be matched with the input wave, something not possible from free space. Then, through a process called directional coupling, it is possible to excite whispering-gallery orbits using waveguides of similar (but not necessarily identical) cross section and refractive index.

Remarkably, these waveguides can be fashioned from optical fiber filaments in the form of a narrow taper. This is of considerable practical importance. Optical power, initially guided within the interior of a fiber cable, can be converted by the tapers into waves guided along micron-wide filaments, and then back again.

Micrograph showing a 40-micron diameter silica microsphere that is doped with the rare earth erbium. Upon incorporation into silica, erbium ionizes to the 3+ state and exhibits dipole transitions in the green and near infrared. In the micrograph one of these transitions has been excited by optical pumping through a fiber taper. The taper can be seen in the micrograph as the slightly out-of-focus horizontal line. The green ring emission from the sphere corresponds to a fundamental whispering-gallery mode of the sphere. This particular sphere is also lasing in the 1.5 micron band (the important telecom band). The lasing emission is efficiently coupled onto the same fiber taper used for optical pumping.

A number of new devices have demonstrated the capabilities of these systems: for example, a laser that uses only the glass itself as the lasing medium. To understand how this device functions, note that ultra-high Q in a tiny package can concentrate optical energy in a tiny volume. Imagine a ring orbit excited by an optical fiber taper. Consider the buildup of power within the ring volume. When the taper and the sphere are coupled appropriately, energy will store with a time constant given by the cavity Q such that the higher the Q, the greater the energy stored. For spheres with diameters in the range of 30-40 microns, optical power circulates within a ring volume of about 10-15 meter³.

Putting all of this together, a fiber taper providing incident power in the range of 1 milli-watt, coupled to a sphere with Q of 100 million, will induce an intensity buildup within the ring orbit in excess of 1 giga-watt/cm². At these intensity levels, normal glass—one of the most linear of optical media—exhibits properties out of the range of our normal experience. Optical propagation can no longer be understood using linear optics, as the molecular motion of the glass becomes highly distorted and gives rise to new optical frequencies and behavior.

One manifestation of this transition is Raman emission, a process in which glass actually amplifies certain wavelengths, rather than becoming weakly lossy. With this optical amplification in a cavity, the glass whispering gallery emits new laser frequencies back into the same taper used to couple the "pump" wave. Other startling effects are observed associated with low-frequency phonons of the glass bead, as well as nonlinear mixing.

Vahala's group continues to research properties of this and other whispering-gallery-based devices. The Raman laser described above, in addition to providing a window on nonlinear cavity physics, may be of practical importance as a compact, ultra-efficient wavelength source. Vahala and Applied Physics graduate students Sean Spillance and Tobias Kippenberg reported on this device in Nature, February 7, 2002. The device set a record for threshold power (the power necessary to induce laser oscillation) of only 60 micro-watts. With further improvements in Q underway, it should be possible to lower this value to mere nano-watts.

Professor Kerry Vahala (BS '80, MS '81, PhD '85) is the first occupant of the Ted and Ginger Jenkins Professorship in Information Science and Technology. Ted Jenkins (MS '66) and his wife, Ginger, established the professorship in early 2002.