Donald S. Cohen, Charles Lee Powell Professor of Applied Mathematics, took emeritus status in July 2003, thereby closing one chapter of his colorful and productive career at Caltech and opening another. Throughout his 38-year career at Caltech, Don has contributed substantially to the research and teaching of applied mathematics at Caltech. He has also served on a number of influential committees and held a variety of administrative positions. Many of his former students have fond memories of Don as both an outstanding teacher and a friend. 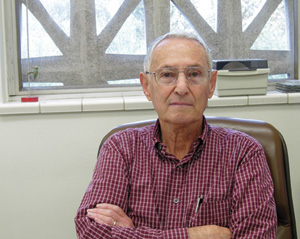 “All we have to do is write that mess as something easy... plus all the other junk.”

Caltech decided to establish an applied mathematics program in 1965 under the leadership of Gerald Whitham. Don was one of the earliest faculty members recruited to this new program. In fact, when Don was offered a faculty position at Caltech in 1965, the applied mathematics option had not been officially established. Don’s initial appointment was with the mathematics option. He rose quickly through the ranks, earning promotions to associate professor in 1967 and to full professor in 1971. In 1998, he was appointed the Charles Lee Powell Professor of Applied Mathematics.

Don’s research in applied mathematics has covered a wide range of topics. Some of his earliest work was in an area that is now called the theory of reaction-diffusion equations. Together with students and colleagues, Don developed and used multiscaling perturbation techniques to make some of the first contributions to bifurcation in reaction-diffusion theory. This work had its major applied thrust in the emerging theory of multiple solutions in chemical reactors. All of this work is still being referenced in several fields.

Don’s research on nonlinear differential equations, pattern formation, stability, and bifurcations has had enormous influence in the areas of mathematical biology and chemical engineering. Along with several colleagues, he helped formulate basic models that led to the development of more quantitative studies of population dynamics in biological systems. Don applied similar techniques to analyze the stability of chemical reaction systems. Continually keeping pace with modern applications, Don’s later works focused on mathematical models in the materials science of polymer films. Some of these studies focused on questions of how the properties of polymers could be tailored to control time-release of drugs in the next generation of pharmaceuticals.

Don will be remembered by many generations of Caltech students who had him for the AMa 95 or AMa 101 applied mathematics course sequences. He was a very popular teacher and was often the source of colorful and very memorable quotes [see inset quotes]; some were collected by students in an article appearing in The California Tech. He had a special ability to make the analysis of even complicated problems seem easy. His playful style in solving problems always entertained, engaged, and challenged students. Don’s outstanding teaching skills have been well recognized by Caltech students. He received awards for undergraduate teaching excellence in 1979, 1987, 1998, and was awarded the Richard P. Feynman Teaching Prize for Excellence in Teaching in 2000.

“The answer is no, but it usually turns out in applications you can get away with it for a while.”

Don has been a popular advisor and mentor at Caltech not only because of his scientific expertise, but also because he is so personable. He is quick to put his students at ease, and often engages them in good-natured verbal sparring. Don is also a seemingly endless source of funny stories about his earlier days at Caltech and at the Courant Institute. More often than not, these stories also manage to convey some lesson about life beyond the classroom, and his students have found them to be so valuable that they have adopted them for use with their own advisees. Don shared his vision for problem solving with nineteen graduate students, many of whom have gone on to become professors of mathematics at other top universities.

Don’s athletic prowess is well known among his students. Don was always willing to play tennis with any of them who were foolish enough to think they could beat him. Other activities, such as trips to the beach, or hiking, or river rafting expeditions, were also common occurrences when one worked with Don. Of course, work has always come first, guided by Don’s skillful advising. He somehow always seems to know the right thing to do or say when a student is stuck on a problem. Don also knows when not to say anything, forcing a student to figure things out on his or her own.

In addition to his contributions to research and teaching, Don has served on a number of influential committees and held several important administrative posts. He was the Executive Officer for Applied Mathematics from 1988 to 1993. He served as the Chairman of the Faculty from 1983 to 1985, and chaired the Faculty Advisory Committee to the Trustees to select Caltech’s fifth president from 1986 to 1987. He also served on the Academic Freedom and Tenure committee many times (both as member and as chairman). In addition, he served on various national committees of the Society for Industrial and Applied Mathematics, the American Mathematical Society, and the American Association for the Advancement of Science. From 1993 to 1995, he served as the Director of the Center for Nonlinear Studies at Los Alamos National Laboratory.

Don remains active in his research. His main focus is the mathematical modeling of biological systems. Currently, he divides his time between Pasadena and Santa Fe. Recently, he became a grandfather. Visiting his daughter in Washington, D.C. and spending time with his grandchild gives him great satisfaction. We are very pleased that Don still spends most of his time at Caltech. Both ACM and Caltech cannot afford to lose his valuable expertise and advice.