Immobilization of Arsenic in the L.A. Aqueduct System: How and How Long?

The hazard posed by arsenic in drinking water has attracted much attention since the recognition in the 1990s of its widespread occurrence in well-water in South Asia, notably Bangladesh. Arsenic occurs less extensively in groundwater in many other countries—including the United States, and in particular, the Southwest.

Arsenic occurs naturally in the environment, as a trace constituent of the Earth’s crust. It is released into water and air by the weathering of rocks, burning of fossil fuels, smelting of ores, and manufacturing processes. The inorganic forms of arsenic, which are the dominant forms found in surface and ground water (mostly as trivalent arsenite, AsIII, and pentavalent arsenate, AsV), are the most toxic forms. Organic forms of arsenic, which occur naturally in marine fish, are much less toxic and are readily eliminated by the body.

According to a 1999 study by the National Academy of Sciences, arsenic in drinking water causes bladder, lung and skin cancer, and may cause kidney and liver cancer. The study also found that arsenic damages the central and peripheral nervous systems, as well as heart and blood vessels, and causes serious skin problems. It also may cause birth defects and reproductive problems. Absorption of arsenic through the skin is minimal and thus hand-washing, bathing, and doing laundry with water containing arsenic do not pose a human health risk. 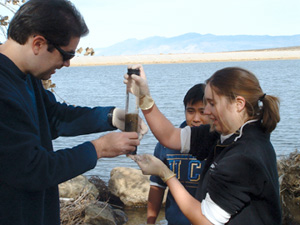 In 2001, the U.S. standard for arsenic in drinking water was changed from 50 to 10 parts per billion (ppb). The new standard will become enforceable in 2006. This change in the drinking water standard was driven by the estimated cancer risk of 1 in 100 associated with drinking two liters of water containing 50 ppb of arsenic each day over the course of a lifetime. That cancer risk is extremely high compared with the 1 in 10,000 risk that is considered acceptable by U.S. Environmental Protection Agency.

Exposure to arsenic in drinking water is usually associated with the use of groundwater for water supply. In Bangaldesh, for example, mobilization of arsenic from aquifer sediments results in the occurrence of arsenic in groundwater at concentrations of hundreds to thousands of parts per billion. Less commonly, arsenic can occur at elevated concentrations in surface waters. This is usually associated with the input of arsenic from geothermal sources (i.e., hot springs). 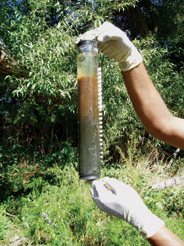 Recently, my research group has been studying the biogeochemical controls on arsenic mobility in the Los Angeles Aqueduct system, which transports water from the eastern Sierra Nevada to the City of Los Angeles for municipal water supply. In this system, we have a unique opportunity to examine arsenic biogeochemistry in the context of a full-scale engineering project that is currently being implemented by the Los Angeles Department of Water and Power (LADWP).

Because of geothermal inputs of arsenic in the Owens Valley, arsenic concentrations in the L.A. Aqueduct water supply are naturally elevated with a historical annual average of 20 ppb. In 1996, an interim arsenic management plan was implemented to lower the concentration of arsenic in the water delivered by the Aqueduct. Since 1996, ferric chloride and a cationic polymer have been introduced into the Aqueduct at the Cottonwood Treatment Plant, an existing facility originally used to control turbidity.

Ferric chloride addition results in the formation of a trivalent iron (FeIII) oxyhydroxide floc (a loose aggregation of particulate material) that is transported as suspended load in the Aqueduct and deposited in North Haiwee Reservoir as the flow velocity decreases. Ferric chloride doses are adjusted at the Cottonwood Treatment Plant to remove sufficient arsenic from the dissolved phase so that the arsenic concentrations below the Haiwee Reservoir are less than 10 ppb. While the treated water flowing toward Los Angeles is thus safer for consumption, this practice has resulted in significant accumulation of arsenic and iron in the Haiwee sediments over a period of eight years.

Sediments and porewaters (waters present in the interstices of rocks and soils) have been sampled in the inlet channel where the Aqueduct feeds into North Haiwee Reservoir by myself and colleagues Penny Kneebone (PhD ’00), Nicole Jones (undergraduate visitor ’00), and Professor Peggy O’Day (University of California, Merced). Sampling has thus far been limited to locations very near the bank because of restrictions on human contact with the water supply. Thus the samples obtained are not entirely representative of conditions throughout the reservoir.

Sediment cores up to 45 centimeters long were collected from the inlet channel and found to contain elevated concentrations of iron, arsenic, and manganese relative to sediments at a control site. Sediment concentrations of these elements remain elevated throughout the core length sampled (averaging 4% iron, 600 parts per million manganese, and 200 ppm arsenic). Porewater profiles reveal that manganese, iron, and arsenic are mobilized at depth in the sediment with manganese released into the porewaters at a more shallow depth than either iron or arsenic. Arsenic concentrations in porewaters at a depth of about 25 cm in the sediment reached values greater than 1000 ppb.

From the water supply perspective, the interim arsenic management plan is fulfilling its objectives. Arsenic concentrations in water delivered to the Los Angeles Aquduct Filtration Plant in Sylmar are consistently below 10 and often below 5 ppb. Thus, the arsenic deposited to the sediments in association with the FeIII oxyhydroxide floc must be almost entirely retained within the sediment. The low porewater concentrations of arsenic in the surficial sediments, despite elevated concentrations at depth in the sediment, indicate that arsenic diffusing upward through the sediment is sequestered into the solid phase before reaching the sediment-water interface.

Given these observations, it is important to try to understand what factors control the rates of release of arsenic and iron. Understanding the biogeochemical controls on arsenic mobilization and sequestration in this system will help us answer questions that pertain directly to the protection of the L.A. Aqueduct water supply. What is the long-term fate of arsenic in the North Haiwee Reservoir sediments? Is continued addition of ferric chloride at Cottonwood necessary to prevent release of arsenic into the overlying water?

Our previous work has shown that release of arsenic to the porewater is associated with the dissolution of the FeIII oxyhydroxide solid, which occurs as the conditions in the sediments become more reducing. This process is illustrated in Figure 1. Yet even as this process occurs, the bulk of the FeIII oxyhydroxide solid remains in the sediment. Why then isn’t the arsenic released into solution simply re-incorporated into the residual solid?

Currently, we are examining the hypothesis that the composition of the porewater at depth in the sediment is such that arsenic adsorption (accumulation at the solid-water interface) onto the FeIII oxyhydroxide solid is not favorable. In particular, re-adsorption of arsenic could be inhibited by elevated concentrations of FeII, phosphate, or by dissolved organic matter (DOM) in the porewater. Investigating this hypothesis is complicated by the difficulty of obtaining sufficient volumes (upwards of tens of milliliters) of porewaters for adsorption experiments (or even for complete analytical characterization). Thus, rather than collecting porewater for adsorption experiments, we have adopted an alternative approach in which freshly prepared FeIII oxyhydroxide is introduced into the sediments and exposed to the porewater in situ.

For this purpose, my graduate student Kate Campbell modified a gel probe sampler that we had used previously to obtain porewater profiles. In the original gel probe sampler, polyacrylamide (clear) gel slabs held in a plexiglass ladder were introduced into the sediment and allowed to equilibrate with the porewater for a few hours. The gel slabs, which were essentially used to collect about 0.2 milliliters of porewater, were then analyzed in the lab.

For the modified sampler, half of the gel slabs were doped with FeIIIoxyhydroxide before being loaded into the sampler. The clear gels will be used (as previously) to obtain porewater profiles of arsenic (and other elements) and the iron-doped gels will provide information on the extent of arsenic adsorption.

In obtaining porewater profiles using the original gel probe sampler, it can be assumed that the equilibration of the clear gels does not perturb the ambient porewater composition. This assumption is reasonable because the volume of water in the gel slabs is quite small and the concentrations of the porewater constituents are not any higher in the clear gel than in the surrounding porewater. With the iron-doped gels, however, adsorption of porewater constituents onto the FeIII oxyhydroxide may result in significant accumulation of porewater constituents in the iron-doped gels and hence their depletion of these chemical species in the porewater in contact with the sampler. Thus, the accumulation of sorbates in the iron-doped gels and the concentrations of solutes in the clear gels will reflect the ambient porewater composition only if the sorbing constituents are resupplied to the porewater from the sediments on the timescale of equilibration of the (mixed clear and iron-doped) gel probe sampler. Preliminary deployment of the sampler (for several hours) suggested some artifacts associated with kinetic limitations of either arsenic resupply from the sediment or uptake onto the iron-doped gels or both. Subsequent laboratory experiments have indicated that an equilibration time of about 1 day will be required for the field deployment of the sampler.

Our study of this system continues. We hope to take advantage of the well-defined characteristics of this system, in which arsenic derives from a fairly constant geothermal source and iron from the LADWP management practices, to explore the coupled biogeochemistry of these elements.

Janet Hering is Professor of Environmental Science and Engineering and the Executive Officer for Keck Laboratories. For additional information, please see http://www.hering.caltech.edu