Using Mathematics to Reinvent the Stethoscope 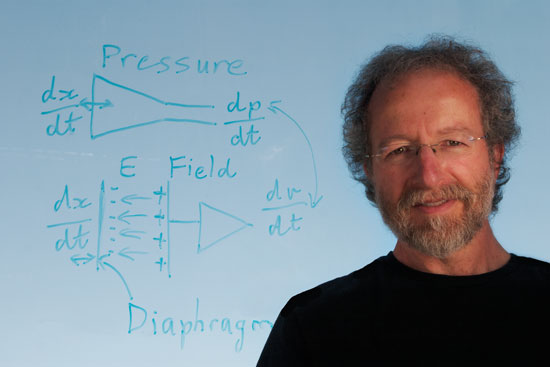 Clive Smith is a Caltech electrical engineering alumnus (MS ’84) who was inspired by Professor Rob Phillips’s article in the last issue of ENGenious entitled “Calculations in the Sand: Random Walks in Physical Biology.” He decided to start a dialogue with Professor Phillips about the key points of the article, including using mathematical models in conjunction with experiment. ENGenious approached Smith to learn more about his Caltech experience and how it has shaped his professional pursuits, including reinventing the stethoscope.

ENGenious: Tell us about your undergraduate experience in South Africa.

Smith: I educated myself out of textbooks. On my first day at Wits University, the dean, Costa Rallis, made a speech telling us, “We will educate you to educate yourselves.” He meant that technology moves so fast that we have to be autodidacts. I later came to interpret it to mean that lectures were pointless. After the middle of sophomore year, I only showed up for exams. I decided that dull education shouldn’t kill my love of engineering. But I’ve never forgotten the dean’s message. Technology has only accelerated, and we have to be lifelong learners. As my favorite Bob Dylan line goes, “He not busy being born is busy dying.”

ENGenious: How did you come to Caltech?

Smith: We had conscription in South Africa, so before I could do graduate studies I went into the South African air force. I didn’t want to use my engineering education to design weapons for an apartheid regime. So I got myself into a medical unit to avoid doing anything militarily useful for a political system that I abhorred. Toward the end of my service, I decided that I wanted to go to America for graduate study. I was fixated as a kid on the moon landing. So I grew up with a feeling that anything that matters in science and technology happens in America. Caltech was on my radar because of the Jet Propulsion Laboratory (JPL). I applied to Caltech and was very honored to get in.

Smith: In great contrast to my South African educational experience, I missed two lectures in my entire Caltech master’s degree program. In terms of the teaching, every single one of the professors was absolutely incredible. My biggest regret is that I didn’t take a unique course that Richard Feynman, John Hopfield, and Carver Mead were teaching called The Physics of Computation. I couldn’t fit it into my curriculum. There were other subjects I wanted to study, but that was a huge mistake.

ENGenious: What made the Caltech professors so incredible?

Smith: First example: Professor Robert Middlebrook, who was the chair of the Caltech Electrical Engineering Department during my time as a student. The grade in his class was based exclusively on homework—one long assignment a week. More importantly, the homework grade was not based on whether one got the right answer, but how. If we used pages and pages of rote mathematics, Middlebrook would guarantee not more than a 20% grade. But if we used judgment and insight, applying math and circuit theory more judiciously in one page, we could get 100%. That was his teaching style—develop judgment and insight to simplify a model by eliminating unnecessary complexity and only then apply mathematics. His approach produced solutions that revealed a kind of “truth” about circuits, by which I mean identifying which parameters most affect system behavior and how to use that understanding to synthesize a better design. You can get answers by rote, but you have to model a problem in a way that the mathematical result becomes useful. This was, perhaps, the most important lesson I ever learned at Caltech, and pretty much every professor taught that philosophy in one way or another. It wasn’t about textbook teaching. You can learn that anywhere. Fundamentally, what they taught at Caltech was how to mathematically model the world and use that insight to improve the world.

Another example of an incredible professor was P. P. Vaidyanathan, who was an assistant professor at the time. I remember a take-home exam that I did for him where I flipped over the page and sunlight shone through the back of the page so I could see the problem upside down, and that’s where the solution to the problem lay. That was the kind of thing he used to teach—sometimes you need to flip a problem upside down and look at the inverse problem. I was a paid teaching assistant for P. P., which was invaluable for me. One year at Caltech was 2.5 times more expensive than my entire bachelor’s degree in South Africa. Which was true for most international students. So my job with P. P. made Caltech affordable.

ENGenious: Can you expand on your ideas to use mathematical models in conjunction with experiments to educate students, including kindergarten to grade 12?

Smith: I’m still a firm believer in mastering fundamentals. “Creative math” without core skills has been a disaster. But widespread negative attitudes are largely due to people not understanding math’s relevance to their lives. So give kids real design and open-ended problems to figure out. Let them start by using intuition and reason, and then show them the beauty of arithmetic methods in the early years and algebraic or calculus solutions later on. Students will care more when they understand the potential power and elegance of mathematics in their own lives. Teaching Newton’s laws in a course called The Physics of Car Accidents would be more valuable to teenagers than dry advanced placement physics. We engineers take mathematics and physics and translate it into the real world. But what everybody should be doing every day is translating the real world into even basic mathematics and physics to better understand what’s going on around them and potentially make more informed choices. Quantitative reasoning is all too rare. It doesn’t have to be complicated, just rooted in valid fundamentals—Richard Feynman dropped material in ice water and we all understood how the Space Shuttle exploded. 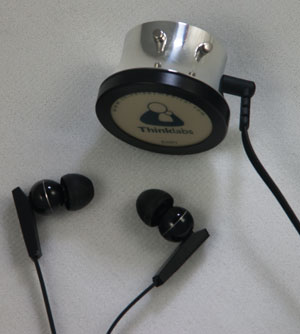 ENGenious: How did you get into the medical device business and start Thinklabs Medical?

Smith: I was doing some research and stumbled across a cardiology paper about the acoustics of modern stethoscopes. The author also built a replica of the original stethoscope from 200 years ago, and he found that stethoscope acoustics were essentially unchanged in two centuries. So I thought, “I did analog circuit design and signal processing at Caltech. I should have the keys to solve this problem!” My goal was to keep the sound as natural as possible for the physician trained with the old stethoscope, but with the benefits of electronic amplification and signal processing. The key creative leap came when I asked a simple question: What is the mathematical and physics model of the mechanical stethoscope and how can I create an electronic model that has the same mathematical and physical behavior? Solve that, and electronics can replace acoustics but the sound should be analogous. It took years for me to be satisfied with the sound, and I ended up solving the problem by inventing a new type of transducer. The solution was to replace air pressure with electric field intensity. I turned a pressure-based diaphragm into a capacitive diaphragm that senses voltage instead of pressure. Quite simple, really. Just ask the right question and develop a good mathematical model. Being obsessive about audio quality paid off. People in esteemed medical schools tell me it has the best sound quality of any stethoscope they’ve ever heard. Framing the right question was key—the foundation of good engineering. Asking the right question and turning it into a useful mathematical model was a Caltech perspective.

ENGenious: How did you get your stethoscope from bench to bedside?

Smith: When I started experimenting, there were essentially no electronic stethoscopes in the market. Then Hewlett Packard (HP) Medical private-labeled a Canadian electronic stethoscope. I had benchmarked it against my technology, with favorable results. I called HP, now Agilent Technologies, and they agreed to a meeting, warning me that every aspiring stethoscope disrupter had walked through their doors. They listened to the sound and asked what complex solution was hidden in the “black box.” What was hidden inside my prototype was an ugly breadboard circuit that only an analog geek could love. I explained the thought process and the physics and they promptly dispatched an engineer to my home to do due diligence on what seemed like a too-elegant solution, especially from a guy working alone in his garage. Agilent then funded my engineering effort. Philips later acquired Agilent Medical, and by the time we were done, Philips decided to exit the stethoscope market. I was a one-person company with intellectual property, a complete design, and results from a Harvard focus group that validated the performance. I decided to produce it under my own Thinklabs brand. I put on a marketing hat and went to a major cardiology conference in Orlando with one working stethoscope. I rented a condo with my brother, who’s a cardiologist, and did an all-nighter building more demo models. I’d once spent 44 hours straight finishing a chip design to meet a deadline at Caltech, so the all-nighters I do as an entrepreneur aren’t a big deal. Caltech teaches stamina. By sunrise I had three working stethoscopes. The conference opened, and I stood sleep-deprived in my small conference booth, looked at the big companies that had booths half the size of a football field, and I thought, “I’m going to spend three days people-watching. What was I thinking?”

ENGenious: Did people come to your booth at the cardiology conference?

Smith: People lined up! We’re usually one of the busiest booths at medical conferences. We’ve reinvented the stethoscope. My new design is a complete departure from the 200-year-old icon of medicine.

ENGenious: What is next for you?

Smith: This market is moving toward telemedicine—examine a patient in Africa and send sounds to America or India for diagnosis using mobile platforms. Novel technologies will be proven in Africa and Asia. They lack resources, so they have to be creative and may leapfrog over our stuck approaches. In America, technology contributes to medical costs more than it improves efficiency. Healthcare is now unaffordable everywhere. Low-cost mobile medicine has been on my radar for many years. We now have amazing technologies with which to innovate, design, and manufacture. I’m a bit of a control freak and perfectionist when it comes to product design—I do the electronics, software, and industrial design, and I’m now using 3-D printing to manufacture in the USA. I’m also exploring low-cost robotic manufacturing. Beyond medicine, I have ideas ranging from audio products to new musical instruments to new Internet applications. There has never been a better time to be an engineer, and I’ve never had more fun being a designer. Hopefully I’ll never stop learning.

Clive Smith is founder and CEO of Thinklabs Medical.