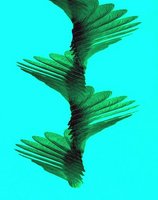 Research by Michael H. Dickinson, the Zarem Professor of Bioengineering and David Lentink of Wageningen, reveals that, by swirling, maple seeds generate a tornado-like vortex that sits atop the front leading edge of the seeds as they spin slowly to the ground. This leading-edge vortex lowers the air pressure over the upper surface of the maple seed, effectively sucking the wing upward to oppose gravity, giving it a boost. The vortex doubles the lift generated by the seeds compared to nonswirling seeds. "There is enormous interest in the development of micro air vehicles, which, because of their size, must function using the same physical principles employed by small, natural flying devices such as insects and maple seeds," says Dickinson. [Caltech Press Release]