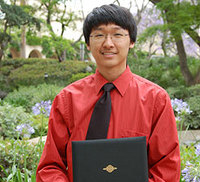 Luke Wang Guo, a junior student in Electrical Engineering with a strong interest in nanotechnology and its applications in the miniaturization of biomedical devices, is the recipient of the 2010 Henry Ford II Scholar Award. The Henry Ford II Scholar Awards are funded under an endowment provided by the Ford Motor Company Fund. The award is made annually to the engineering student with the best academic record at the end of the third year of undergraduate study.